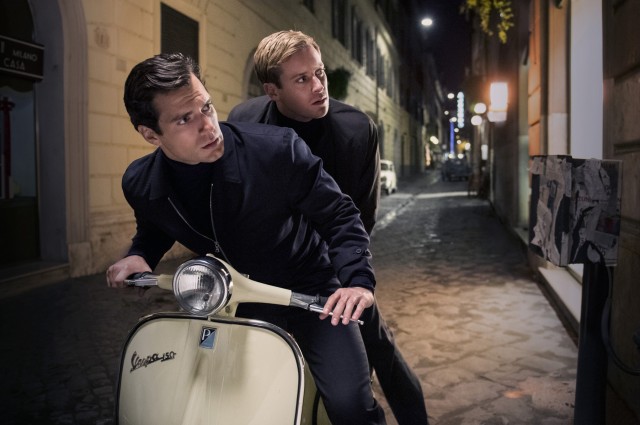 Guy Ritchie has a good eye and his visual sensibility is one of the big pleasures of The Man from U.N.C.L.E.. The 60s costumes, buildings and overall flavour are a joy to soak up. I enjoyed the performances too. Henry Cavill is a perfect fit for Napoleon Solo in both the acting sense and as an aesthetic choice. Armie Hammer, Alicia Vikander, Elizabeth Debecki and Hugh Grant work well too but there’s something about Cavill’s work that stands out. I’ve never seen him so at ease in a role and so ideal. I wish the powers that be would let him flex some of these muscles in those damn comic book flicks.

There’s some playful invention in the set pieces too. One in particular features Solo enjoying a packed lunch and classical music in the safety of a car seat while Hammer endures a hectic action sequence played entirely in the background. It’s a wonderful scene and the kind that justifies the film’s existence. I wish the rest of the movie shared this scene’s clever tweaking of tropes and expectation with visual wit to match. There’s nothing as stylishly extravagant as Ritchie’s flourishes in his Sherlock Holmesmovies either but there’s a sense of fun and kineticism that is welcome.

The whole film really comes apart as it piles on the plot meaning the characters are reduced to feet running on concrete rather than having interesting interactions with one another. By the end I kind of tuned out. Still, the whole thing is nice to look at and worth a once over. Plus the score by Daniel Pemberton is an absolute pleasure.