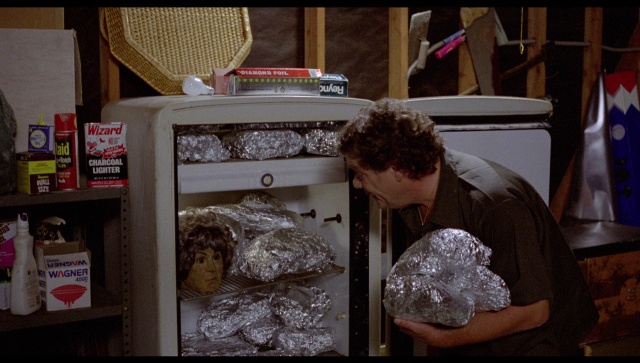 Okay. So read the title Microwave Massacre to yourself. You’re immediately picturing a movie in your head right? Well, Microwave Massacre is absolutely not that movie. Totally devoid of electronic kitchen appliance-based massacres, my first instinct was to call up whoever thought of that title and demand my money back. But life’s too short. What you get instead is a weird American sitcom from hell.

It’s about a Joe Nobody (played by guy who voiced Frosty the Snowman) who beats his wife to death with a salt shaker after being driven mad by her terrible cooking. He chops the body up and stores it in the freezer with the rest of the meat but after accidentally eating a slice he gets a taste for human flesh so turns to dicing up hookers to feed his new found appetite. There is a big-ass microwave in there but, quite hilariously, its sole purpose in the movie is to heat food up. The whole thing is played for laughs. Cheap ones at that. And the filmmaking is amateur at best. It’s one of those films that feels like a bunch of businessmen saw the booming horror market on VHS and tried to cook up (geddit?) a movie that would sell in a plastic case wrapped in some lurid cover art. They just didn’t bother putting a proper movie inside.

At 76 minutes, it’s a slim watch but even then the plot is stretched to ridiculous lengths. There’s lots of cheery T&A in there but it’s all quite awkward. All the lines are delivered terribly and when every line is a half-assed one-liner you know you’re dead in the water. The best way to watch the film is as a spoof of American soap operas. I’m almost convinced the filmmakers meant to add a laughing track to the whole thing but forgot at the last minute. They also forgot to add the microwave massacre. A terrible film but entertainingly bad.

This entry was posted in Arrow Films, Movies Watched In 2016, Reviews and tagged Microwave Massacre. Bookmark the permalink.