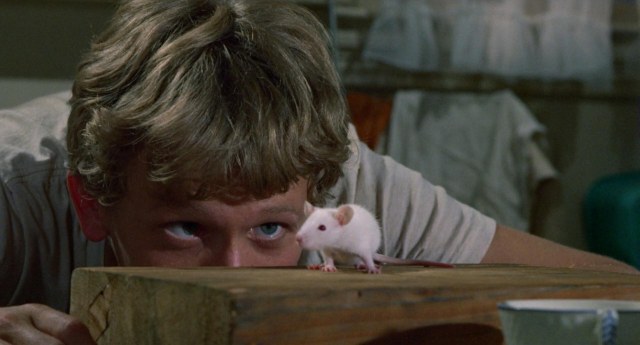 What an odd film. Anchored by a nutty, jittery and sympathetic performance by Bruce Davison, this diminutive creature feature gets a lot of mileage out of its central hook. Rats, baby! And lots of ’em.

More of a deranged character study than an all-out horror show, Willard certainly has a look and feel all of its own. The 60s into 70s decor and dour, autumnal suburban backdrops provide an effective sense of time and place, and the story of a young man trying to gain respect from his elders by scorching his own path makes it feel like a nightmarish counterpart to The Graduate. Davison certainly exists in the same unconventional, blazer-wearing leading man milieu as Dustin Hoffman.

Most of the cast lack any sense of Hollywood glamour with the film dressed down and filled with the kind of authentic-looking and earthy character actors who would go on to define the face of American cinema in the 70s. The most glamorous is probably Clint Eastwood muse Sondra Locke, but even she seems dowdy and is therefore integrated seamlessly into the grimy proceedings. The supporting cast add a lot of legitimacy to what could have easily been forgettable B-fodder too, with Ernest Borgnine showing up as WIllard’s bullish boss and the Bride of Frankenstein herself, Elsa Lanchester, appearing as Willard’s mother.

It’s the story of an outcast and thus itself feels like an outcast. While it has its own loyal fanbase, it is nowhere near as well-regarded – or widely-seen – as other films of its kind. The killer rats idea is undoubtedly silly but the film really commits to it. The subplot concerning two rats duelling for Willard’s affections – the “good” white rat, Socrates, and “evil” black rat Ben – is pretty absurd but the imagery and execution is so brazen that you can’t help but enjoy it. Davison’s eccentric performance is the key here though and, beyond the ratty shocks, the main reason I would recommend checking this out.

(I also have fond memories of the Crispin Glover remake which, from what I remember, was bigger and glossier though equally dark and gothic. I haven’t seen it in probably over ten years but discovering the original sure makes me want to re-familiarise myself with it.)