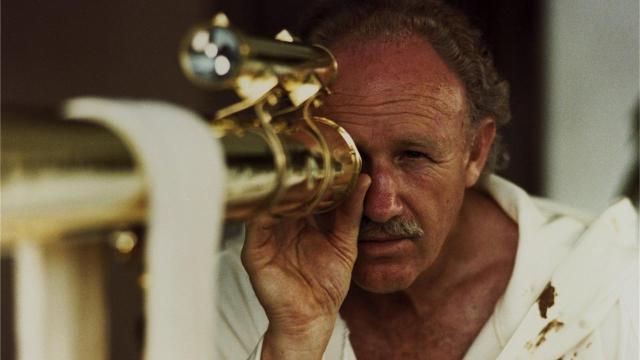 A typically Roeg-ian mosaic of greed, lust and rivalry that starts off ice-cold before reaching sunburnt-levels of craziness. Really underrated performance from Hackman here. He plays an extremely hateful, angry character. Very characteristic of Hackman’s best roles (Popeye, Harry Caul) but with extra venom and bitterness. Like Daniel Plainview before Daniel Plainview. You’ve also got Rutger Haur fresh off of Blade Runner and getting his dick out for Paul Verhoeven. He’s great. Even better than him is Theresa Russell, Roeg’s muse at the time and also one of my favourite actresses ever. What a beautiful, fierce woman. She bares a lot of flesh here for you perves but her acting is so strong you don’t even notice. I wish some young filmmaker would put her to use, it’s been way too long since I last saw her on the big screen.

As you would expect from Roeg, Eureka is packed with so much strong imagery and memorable, harrowing moments. Just before Hackman finds (literally) an ocean of gold beneath the ice, a strange character blows his own head off and we see all the particles of his brain swirl around in the air, dancing with the snowflakes like diamonds. This early harbinger of death and destruction haunts the rest of the film. Roeg’s experimental cutting is in full force and he rarely lets us forget this image by peppering it into scenes like shock therapy. Later on a character is savagely attacked and burnt alive with a blow-torch and his charred, melting body is strewn with pillow-feathers. Surely one of the most brutal and affecting murders I’ve ever seen. It’s the stuff of nightmares. Hallucinogenic and frenzied in a way only Nicolas Roeg can deliver. Man I’ve wanted to see this for so long. Not many Roeg gaps to fill now. Even his B-sides are fucking great.