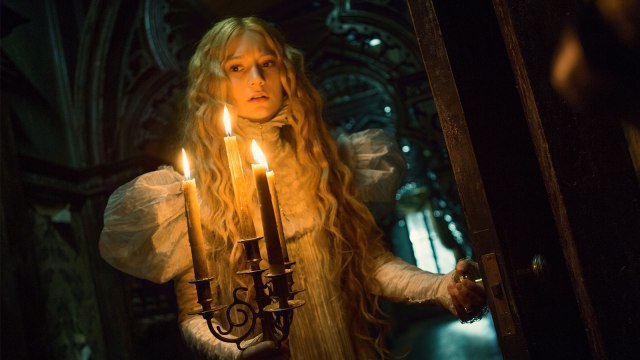 Guillermo del Toro builds an aesthetic dreamhouse that seems to be in a constant nightmare. From the faces that build up the cast to the smallest stitch in every costume, the design of Crimson Peak is so constant; it’s impeccable and jaw-dropping. Nothing feels out of place or wasted. You get a sense that Tom Hiddleston was cast for his porcelain, angular features as much as his acting talent. Indeed, just to look at Hiddleston, Chastain and Wasikowska side-by-side on the film’s one sheet sparks your imagination into a dark world of forbidden delights more than any trailer could. They are of a piece with everything in this movie. One misstep and the entire illusion would come crashing down. There’s a pure physicality to everything on a scale that is so rare these days that watching Crimson Peak becomes revelatory. When visionaries like del Toro are given the resources to really fulfill their imagination en-masse like he does here, you’re reminded of how magical creation-as-filmmaking can be.

The colour red will always be loaded with meaning in cinema yet here del Toro somehow claims the shade as his own for two hours. Whether it is representing fierce squirts of hot blood or the omnipresent red clay slowly swallowing Allerdale Hall alive, the colour red saturates Crimson Peak and it is at once delicious and diabolical. The way the colour is constantly juxtaposed with lighter extremes is addictive; Mia Wasikowska’s Edith clad in flowing white gowns, her golden hair endlessly descending while the red muck taints her feet and train is one of those images that suddenly becomes burnt into your mind as iconic. The same goes for Jessica Chastain who turns in a vampy performance as Lady Lucille Sharpe and wields both a knife and red lipstick with equal dominance.

Hot passions run throughout Crimson Peak and it’s aesthetic elegance is equaled by a thematically satisfying and pulpy plot. While undoubtedly steeped in the traditions and history of horror, gothic romance, Victorian ghost stories etc. del Toro himself has become his own brand and to call this anything other than “del Torian” would be to give it a huge disservice. The man has become so in control of his ideas and intentions now that one of Crimson Peak‘s greatest pleasures comes from seeing him make exactly the kind of movie he intends. Unlike his previous studio work, Pacific Rim, Blade II and the Hellboy films, this one sits directly beside his spanish-language movies as something culled purely from his own sensibility. The ghosts of Crimson Peak seem to exist and function in much the same way the ghosts do in The Devil’s Backbone. As it was unfairly marketed as a straight-up horror flick, you’d be forgiven for thinking Crimson Peak depicts a sinister otherworld, but the ghosts and beings are secondary to the evils of the living. Their main reason here is to help and guide the living to the answers and salvation that has otherwise eluded them. Del Toro’s treatment of the supernatural in his body of work is one of the most unconventional and complex ever depicted. Thankfully Crimson Peak keeps that tradition alive, for lack of a better word.

Watching Crimson Peak is to feel the artist’s heart ache, his desires born into flesh and his nightmares and dreams given teeth and fury. If you go to the movies to see original artists create original art then this is one that delivers on that promise. It is also so unapologetically genre-born and soaked in visceral thrills and gratuitous shocks that the high-art execution is even more delightful. Crimson Peak is a masterpiece of design that is nothing short of a feast for the eyes, yet when the plot demands it, del Toro isn’t afraid to tear those eyes right out of your head with operatic glee.