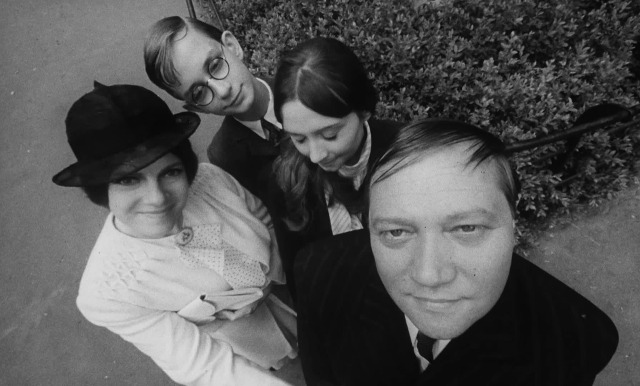 The Cremator plays like many things, primarily a sociopolitical document of 1930s Czechoslovakia presented as a monochromatic horror film assembled with the same hectic anarchy which frazzles Terry Gilliam’s cut-up animations. But it also works as a photo essay of bizzaro Czech faces headlined by the intensely slimy Rudolf Hrušínský. It is also, of course, a showcase for the visionary aesthetics of the 60s Czech new Wave.

Locked in a vault until 1989, it’s no surprise that Juraj Herz’ film has only started to gain exposure and a loyal fanbase over the past decade or so but were it available for consumption earlier, there’s no doubt it would be widely considered an important and singular work by now. It is a film of sharp edges, and not just in the jagged style, but also its attitudes and opinions. As a not-so-veiled tale of the rise of Nazism in 30s Europe, it constantly operates at a steady simmer, feeling like a hotpot of political and social tensions until finally showing its hand in the last act and boiling over into proper hysteria. The film is electrified by a jittery paranoia which it doesn’t try to repel but embraces, ultimately submerging itself into spittle mouthed fury. You might not spend a lot of the running time asking yourself “What has all this got to do with a seedy Cremator?” but as soon as you have your answer you’ll be kicking yourself for not asking that question sooner.

First and foremost though The Cremator really works its magic as a subjective and immersive character study. Hrušínský’s performance is one for the ages. Comparisons to Peter Lorree are on the money but I also found myself thinking of Richard Attenborough in 10 Rillington Place. Hrušínský’s performance is so rich with odd details – the way he runs a comb through the hair of a corpse only then to use it on himself – and also how flies seem to buzz around his greased down hair at one point. It’s a performance that fuels the entire film, but one which the film itself also works hard to animate. The editing patterns, the use of wide lenses – like fish-eye wide – are all in service of the titular Cremator’s wild psyche. His weirdness is furthered by the extended cast too, as strange characters seem to populate the edges of every scene and location. Watching Hrušínský’s Cremator snake his way around these people and hearing him narrate in endless soliloquies is to become acquainted with one of those unique characters you’re only happy to befriend with the safety of a screen between you. He is utterly fascinating to watch and dislike, to the point of actual enjoyment.

With its gorgeous gothic verite aesthetic, nightmarish imagery and layered subtext, not to mention the lead character inseparable from the film he is inhabiting, The Cremator is an uncut gem of Czech cinema that really makes a mark. Even now I can think of the way the film cuts from extreme close ups to vacuuous wide shots and feel the jolt, like that pull in your stomach you get when you go on the big dipper. Even in the relative safety of your subconscious it remains stylistically visceral.

This entry was posted in Reviews and tagged 1969, Czech New Wave, Juraj Herz. Bookmark the permalink.