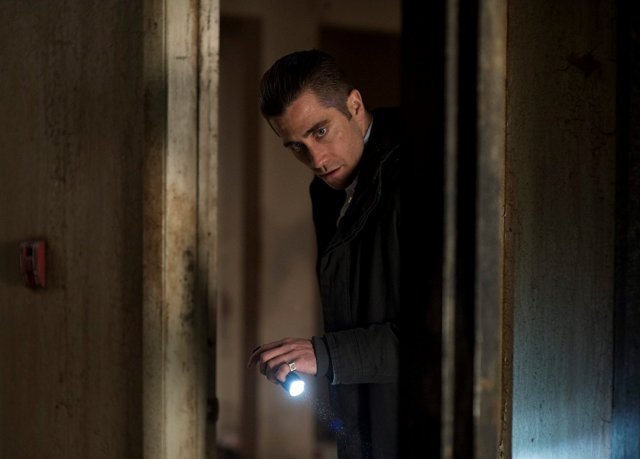 I remember seeing Prisoners the week of its release in 2013 and at a certain point I asked myself “Did Roger Deakins shoot this or something?” Lo and behold, as his name appeared in the credits at the end I had to smile. It’s one of the only times I’ve managed to spot a director of photography’s signature without any sort of clue. I went in blind, but the craft and care within the images, beyond just the direction, was unmistakable.

In 2013 this felt like a refreshingly dark and adult thriller for a major studio to put out. Unafraid to get its hands dirty, ponder troubling questions and study conflicting characters, it instantly became one of my favourite films of that year. With two of Hollywood’s biggest stars sharing top billing, I was surprised at how far and committed the film was to pushing itself into the darkness.

While the central mystery gripped me the first time around, watching it today for the third time, I can admit that, frankly, it’s pretty silly, airport paperback stuff which I’m surprised at how much it originally sucked me in. The conclusion especially is rather groan-worthy, with Gyllenhaal suddenly noticing a bunch of photographs that seem to conveniently spell everything out to both him and the audience. It’s a neat rush to the end that doesn’t really work with the nihilism and dead-end-ness established by the rest of the movie.

Still, Villeneueve has a gift for elevating his material to the point where it looks and sounds austere. By the time you get to that hellish drive through the sleet to save a young girl’s life, blood in Gyllenhaal’s eyes, you are WITH IT, white knuckles and all. There’s no way this movie needed to be two and a half hours, but I’ll be damned if I don’t enjoy the added breathing space and sheer indulgence in the mood, character and atmosphere.

The whole film is blanketed by this guttural sense of grief and loss. Constantly autumnal and in mourning, it’s an oppressive film to bask in full of piercing desaturated imagery and textures. That reveal of Paul Dano’s beaten face, for instance, is still hard to shake. It’s like a Goya painting. The endless shots through windows streaked with rain or extended compositions behind characters’ heads really do amount to something, a suffocating aesthetic that stays with you and deepens the film’s themes substantially. There’s a patience here that was welcome in the mainstream cinema landscape in 2013. Was anyone surprised that Villenueve would become a top Hollywood player in light of this thing? I doubt it.

Putting the younger Gyllenhaal up against the older, alpha-male Jackman turns out to be an inspired move too. Both of them turn in some of the best performances of their careers. Jackman especially goes big, big, big and, while it didn’t work for everybody, I loved seeing him finally tap into the darkness and rage within himself without the shackles of a PG13 rating. Without this I don’t think we would have got Logan (or *ahem* Chappie). As for Gyllenhaal, this is a year away from his revelatory turn in Nightcrawler but it sows some of the first seeds to show that he’s an actor capable of transforming himself entirely. Before that film, I’d say this was his best work. The boy becomes a man.

I don’t quite hold Prisoners up on the same pedestal I did when I first saw it but it’s definitely a film I enjoy revisiting from time to time, if just to take in the craft again and again. This proved to be the first Villenueve movie I saw that signalled the arrival of a major new talent and his partnership with Deakins, especially, has resulted in some of the most stunning imagery to come out of Hollywood in the last few years. I hope they continue working together for a long, long time.