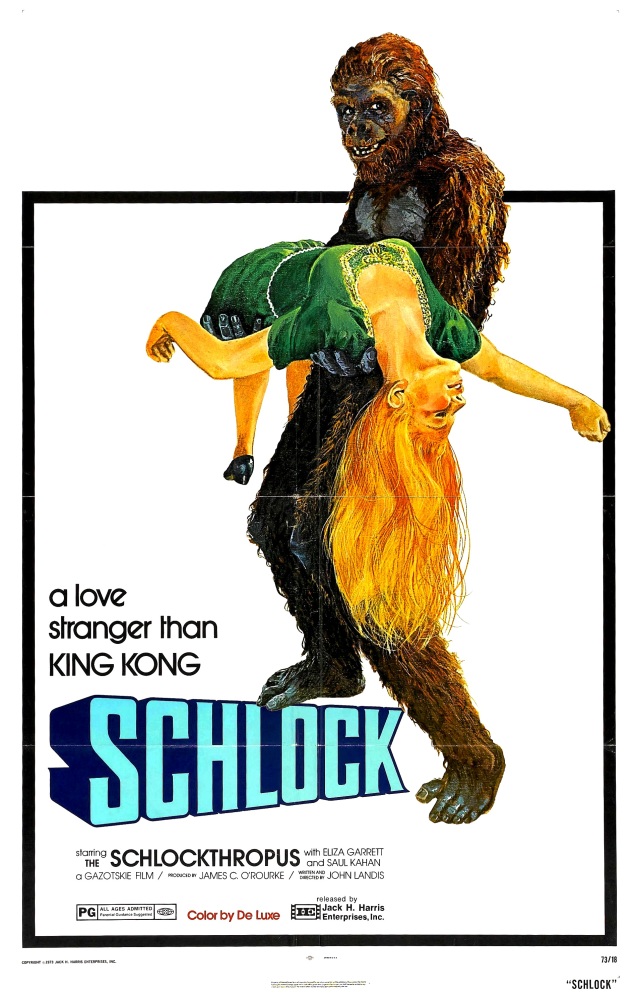 Schlock is John Landis’ first film. Made on a shoestring budget while he was in his early twenties, in many ways it provides you with a roadmap that his subsequent career would rarely stray from. Concerning a prehistoric apeman – billed as a Schlockthropus by scientists and the media – who begins terrorising California after being awoken from his centuries-long slumber. He then falls in love with a blind girl and goes on various escapades. Landis never misses the opportunity for a gag, visual or verbal, ensuring it shares the same mischievous rat-a-tat pacing many of his best known films are celebrated for. There’s even a no-budget version of a Blues Brothers cop car chase as well as a love story and ending that feels like a total dry run for An American Werewolf in London.

While widely praised for his 80s work and knack for blending genres, Landis rarely gets his due as a visual stylist but his films are full of arresting images, and many downright iconic ones. Take the first scene in Schlock which fades in on a slowly spinning roundabout with a dead kid draped over it before the camera cranes up to reveal an entire playground of dead kids. The macabre tone is immediately dispelled by a gag, ofcourse, but this opening is nevertheless the work of a gifted filmmaker with a confident eye and a kick-butt sense of how to start a movie. Even Schlock‘s central image of a man in a crude gorilla suit (played by Landis himself with only eye sockets and body language as emotive tools) taps into the charms of a specific heritage of special effect cinema and warms the heart the same way early stop-motion footage does or any B-movie featuring a guy in a rubber suit. It should come as no surprise that special effect extraordinaire Rick Baker got his very first credit on this flick.

At once a delightfully daft collection of humorous vignettes (ala The Kentucky Fried Movie) as well as a loving send up of B-movie cliches, Schlock works as both a comment on the films it pays homage to as well as worthy successor to them. Sure it’s cheap and, duh, schlocky, but it will certainly put a smile on your face. The perfect John Landis debut.

This entry was posted in Reviews and tagged 1973, John Landis, Rick Baker. Bookmark the permalink.