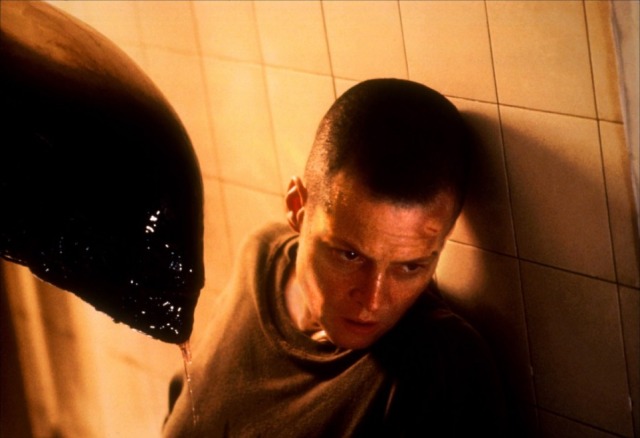 Everyone considers Alien³ a stain on both the Alien franchise and Fincher’s career (himself included) but his fingerprints are all over this thing. I mean, its surely one of the most nihilistic studio movies ever made. The cold-blooded way they off-handedly dispatch both Hicks and Newt (off-screen, between movies no less) is so ruthless. I know many fans (and Michael Biehn) regard it disrespectful but the cruelty is in keeping with the coldness established in Ridley’s original. Like, unless you’re Neil Blomkamp, do you really want to see Ripley, Newt and Hicks bumming around on a new adventure? This has always been Ripley’s story at its core. Those guys were just passengers. Plus, the ending of Aliens is perfect because of that very reason: it’s an ending.

Despite what most people say, this flick does occasionally conjure up some genuinely distressing imagery and emotions. The autopsy scene, for instance, is legit upsetting and disturbing. The overall dilemma Ripley faces is dramatic too, and completely different to anything in the previous two films. The overall tone is so serious and dour. All hope is lost in this fucking movie. Name me another tentpole flick that ends with the heroine tossing herself into molten lava while cradling the foetus of an alien creature which has just burst through her ribcage. This is some seriously bleak and apocalyptic shit, and shockingly so. Plus the design work is beautiful.

Like Scott, Fincher is great at painting grotesque pictures and even here, with his arms tied behind his back, he can’t help but create something gorgeously ugly. I’d even argue that the image of Ripley here, with the shaved head, is the look of the character which many will subconsciously consider definitive. The re-design of the Giger’s Xenomorph is cool too. I really dig the amber/golden finish from all the fire reflecting off of it and the fact it is mostly exclusively quadrupedal. It’s something different and, in keeping with the last two movies, evolves the mythology of the creature. Boxes ticked.

While it’s not Alien or Aliens, at the very least you should consider Alien³ a success because it doesn’t attempt to merely rehash what went before or soften any edges. This is easily the toughest movie of the entire series and is all the better for it. This is a horror movie after all. Flawed and stupid in a lot of areas, yes, but as a visual exercise in apocalyptic terror, it’s far better than most people give it credit for and incredibly memorable. The original workprint version is better still. I wish franchises today had the balls to be this gruelling.