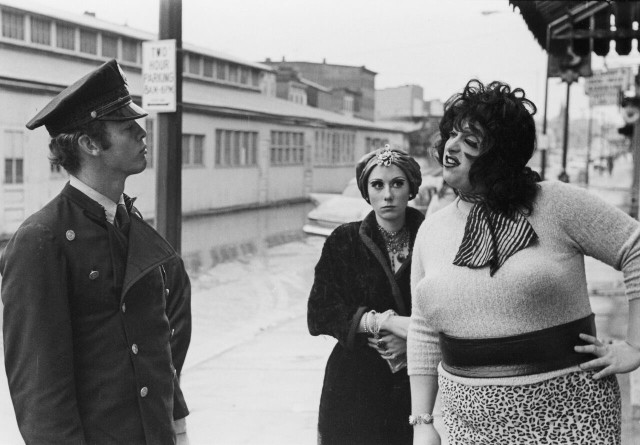 Don’t worry, the irony of seeing Multiple Maniacs, my first John Waters movie, via a pristine new HD restoration courtesy of the Criterion Collection is not lost on me. There’s no doubt that seeing Waters’ movies, especially these early ones, on anything other than a beat-up 16mm print projected onto a dingy bathroom wall massively dilutes the experience. But what a world we live in when you can buy a movie like this with that coveted “C” on the spine!

I’m happy to report though that all my preconceived notions of what a John Waters movie entails turned out to completely accurate. This is more or less exactly the kind of film I hoped it would be. Scuzzy, amateurish, disgusting and provocative, Multiple Maniacs flies its flag proudly in favour of all things bad taste. Waters’ sloppiness behind the camera is made up for by the carnival-like sense of rebelliousness and freedom driving every madcap episode. It’s rare you see people like this on screen, some of them closer to creatures than conventional human beings – which should be considered a compliment – so free of inhibitions and, seemingly, dignity. It’s thrilling to see this side of creativity represented by such raw images. In its own way, it’s extremely beautiful and endearing. Waters acts as ringmaster for his repertoire of outcasts and lunatics and the low-fi zaniness is, for a time, quite intoxicating.

Now this is a 90 minute movie but it feels long even at that ideal length. There’s so much screeching and madness that after a while, close to the halfway point, it all starts to feel a bit like numbing white noise rather than a freewheeling aphrodisiac. The episodes quickly feel repetitive and Waters’ limited technique soon outstays its welcome. It’s the kind of movie that, if made today – in itself an impossibility – would be criticised for being a short film stretched to feature length. I definitely became restless the further it went along which diluted the overall impact quite a bit. Despite this, the film has one last showstopper up its sleeve which comes in the shape of probably the greatest rape scene ever committed to film. Now…in true Waters fashion, I understand how unbelievably icky that statement sounds (I’m not really prone to ranking cinematic sexual assaults) but the one Waters orchestrates here, involving a Divine and a giant puppet Lobster, is so unbelievably bonkers that it instantly becomes something you’ll never forget. The epitome of the words “WHAT THE FUCK?”, for it to become anything other than all-timer is flat out wrong.

Regardless of its shortcomings, Multiple Maniacs is still an important part of cinema history, even if that part resides in one of its dirty little corners. I hope this is the first of many Waters movies Criterion puts out as I’ll happily splash out on them all. Waters is a fascinating figure in film, and the many posters adjorning bedroom walls in this movie – Polanski, Pasolini and others – suggest that he himself had more highbrow taste and ambitions than perhaps his movies suggest. In that sense, I guess its apt that a boutique label like Criterion and not a bathroom wall should be their ultimate home.

This entry was posted in Reviews and tagged 1970, Divine, John Waters. Bookmark the permalink.