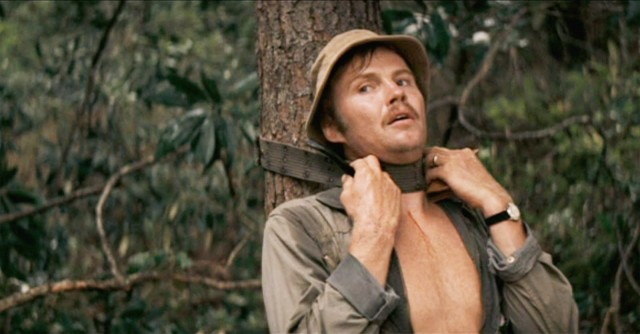 Deliverance paved the way for the redneck rapist stereotype that still populates backwoods horror cinema, but beyond that I always have trouble pin-pointing why this movie has endured for so long. It’s certainly a strong piece of work, unbelievably 70s in its plot and execution but I don’t feel like it has stood the test of time like so many other classics of this era do.

Maybe it’s because countless filmmakers have taken what was established here – the backwoods survival picture – and elaborated on it in more interesting ways. I much prefer Walter Hill’s Southern Comfort for instance, and even First Blood – two movies that couldn’t exist without Deliverance. Even as far as Boorman goes, I’d rank this below both Point Blank and Excalibur and frankly I even get more out of his much maligned Zardoz on repeat viewings than I do with this. While well acted, the characters feel quite thin to me and the moral dilemma at its centre – now viewed through the prism of decades of imitators and variations – is pretty threadbare and not especially gripping. Props to Ned Beatty, Ronny Cox and Jon Voight’s performances though for relying on body language and subtlety to convey their inner turmoil. Burt Reynolds, in comparison, is a tad hammy.

That being said, there’s a lot of atmospheric pleasures to be had, which is the main reason I return to it from time to time. The duelling banjos scene created an anthem for culture clash gone bad and the film’s swampy aesthetic (courtesy of the great Vilmos Zsigmond – did any other DOP photograph the 70s with such texture?) creates a suitably grimy visual experience. Even the shoddy day-for-night stuff is rather beautiful to take in because of how unreal it is. There are images I always remember, like the church on wheels or that hand rising out of the lake in Voight’s dream (which De Palma retooled for Carrie‘s final scare), but still, I never consider this the great movie it has become known as. Lets see how I feel in another few years when I give it yet another spin.