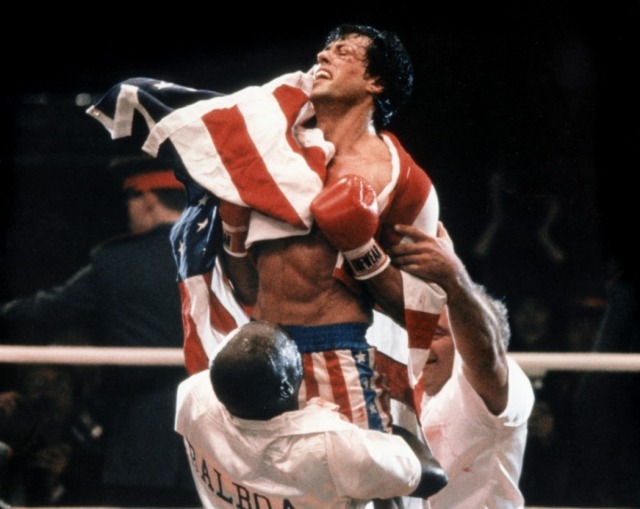 Stallone never really gets his due as a filmmaker. Anyone who believes in the auteur theory could make a serious case for Stallone just by looking at the Rockyseries. I love these movies because of how he utilised them to reflect on his own career and concerns, year by year throughout most of the eighties. Whenever he had something to say, he’d make a new Rocky movie. They’re all incredibly personal to him and truly fascinating to analyse when looked at through that semi-autobiographical lens.

While each sequel follows pretty much the same exact structure, each one pushes the form to a bigger extreme. It’s easy to mock a movie like Rocky IV because it’s the silliest of Stallone’s sequels, and the bluntest. This one especially is so much a product of the mainstream filmmaking tropes and sensibilities of the time. It literally opens with two metal boxing gloves, one adjourned with the American flag, the other with the Russian flag, punching each other and exploding. And the film has like, 70 montages in a row. But damn is this thing a primarily visual experience.

Honestly, you can watch Rocky IV with the sound off and still understand exactly what’s going on, who’s who and how they relate to one another. With this one more than any other Rocky movie, you get the sense that Stallone wished he could just do away with all the talky bits and stage a movie entirely out of wordless training montages and boxing sequences. And you know what? It would work. Like it or not, this dumb American beefburger of a movie is also pure cinema. Yeah, I said it.

Also, as a side note, I once had a crazy theory about this movie when I was a kid. The first time I saw it, I was certain Drago was going to turn out to be an android at the end. Like what’s with Drago’s mega futuristic isolated training regime consisting of electronics and computer screens? And his apparent super-human strength? And robotic demeanour? AND there’s even a fucking SUBPLOT about Paulie getting a pet robot! If that wasn’t intended as foreshadowing, I have no idea what it’s there for. I’m still not entirely convinced Stallone didn’t shoot an original ending where Rocky lays a finishing blow to Drago’s head and the skin tears off revealing a chrome skull beneath that then short-circuits and explodes. If only. Weirder things happened in 80s movies, mark my words.