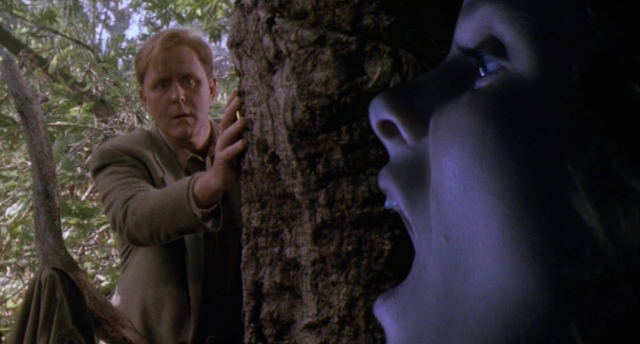 A fascinating re-assembly that restores De Palma’s original structure before he got cold feet and made it more linear to avoid confusion amongst audiences. I rewatched the theatrical version just before this and, for anyone savvy to De Palma’s directorial tics, it’s actually pretty obvious where he meant each scene to fall just from the execution alone. The long POV shot of Davidovich’s character walking into the gift-shop and her appearing on the TV screen is a classic De Palma intro, so I’m not surprised to find that it was originally intended to be the film’s first scene. The riffs on Psycho‘s structure are another big signifier too.

I’d definitely say this cut feels truer to itself; being a film about fractured psyches and psychological blackouts, a twisty plot full of fake outs and dead-ends is wholly appropriate. It also transforms a seemingly typical De Palma thriller into something far more abstract and purposeful. The theatrical cut feels like De Palma on autopilot, whereas the director’s cut suggests a desire to tell this kind of story in a way he hadn’t previously making it more of a valid stylistic exercise. Also: it’s just a lot of fun.

De Palma reaches almost parody levels of self-awareness here with Lithgow going above and beyond his nuttiness in Blow Out, Donaggio’s score going all out in the most obvious places and the disposal of a ridiculous steadicam shot travelling the entire infrastructure of a three storey police station just to spice up some boring ass exposition. I’m so in. The original tagline nails it: “De Mented. De Ranged. De Ceptive. De Palma.”