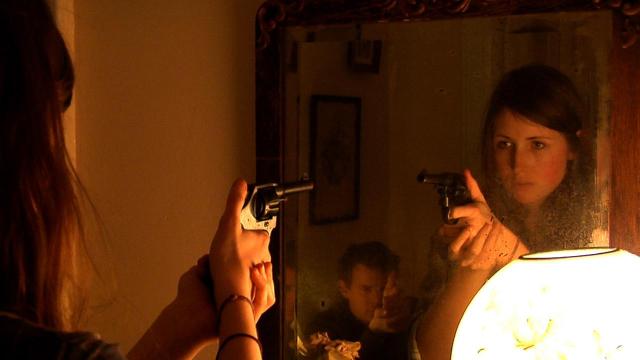 More focused than other early Swanberg stuff I’ve seen and also, apparently, with purpose. Silver Bullets also gains bonus points for featuring a strong central performance from Kate Lyn Sheil who, only now in 2016, finally seems to be having her moment. Ti West also crops up as…basically himself in a bunch of fictionalised situations set-up by Swanberg, which is fun but, as anyone familiar with the mumblecore movement will know, is only as good as the ideas within. That said, there’s a lovely little seduction scene involving a werewolf mask that feels like it could only arise naturally in a film of this ilk, which is why I’ve got a lot of time for the likes of Swanberg.

The presence of an actual tripod and held compositions is welcome and the ruminations on filmmaking at this level feel mined from a very personal place. Silver Bullets was made during an extremely productive period for Swanberg (he made seven features in one year) but the film doesn’t at all feel like a rushed, half-baked example of “one of many” and satisfies as a stand-alone work. You can feel his growing boredom of naturalism and dogme restrictions and even though the instances of heightened stylisation are a bit abrupt and weird, they are obviously pointing towards an artistic development and creative breakthrough. Scenes don’t just take place in anonymous rooms, there’s actual stuff happening like horror make-up and weird stripteases. I mean, it’s not mind-blowing but having Sheil in the lead and the semi-autobiographical elements go a long way to making this a satisfying 73 minutes spent in Swanbergville. Music’s pretty neat too.