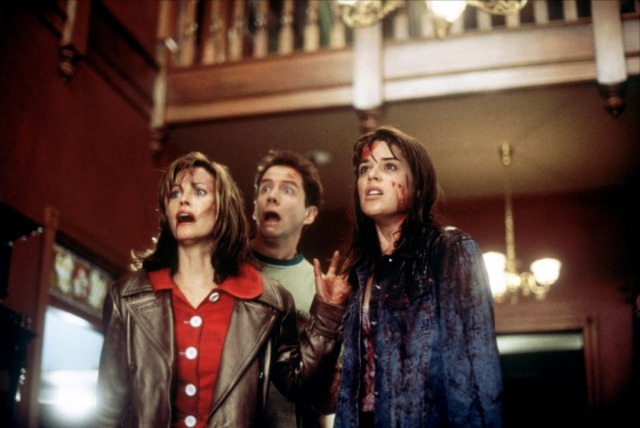 Scream is one of those movies I’ve probably seen upwards of forty times from being a pre-teen all the way up to today. Its influence on post-modern cinema and 90s horror is practically all encompassing. The film is renowned for its genre-savvy characters, pop-culture dialect and “hip” deconstructions of slasher cliches. It’d be easy for Scream to feel dated and blunted but watching it recently for the film’s upcoming 20th anniversary, I realised it’s just as good as it ever was.

Kevin Williamson’s screenplay still feels razor sharp. The set-pieces are extremely strong with glorious, gruesome payoffs timed perfectly. The character work is impressive too. The film is so much about legacy and ghosts (metaphorically) being passed down the generations. Not only in terms of horror/slasher history in regards to the film itself, but also literally within the characters’ lives. I’d never realised how deep Sidney’s turmoil goes until this re-watch and feel dumb for admitting as much because it’s so thoroughly sign-posted throughout. Sidney – as the apparent classic, virginal final girl – is terrified of intimacy and sexuality due to her mother’s reputation as the town whore. So many scenes ram this point home. There’s clearly whispers and rumours about Sidney’s mother’s infidelity running amok in Woodsboro. But it’s not until Sidney is faced with her psychotic boyfriend claiming his murder rampage is a direct result of it that she seems to accept her mother as the flawed, troubled person she really was. That particular arc is the spine of the entire movie and, I’ll be damned, it’s plotted wonderfully.

The A-list cast of fresh faces paired with a powerhouse horror director skyrocketing himself out of late-career purgatory into genre dominance again is also thrilling. Craven was in his late fifties while directing this movie but his choice in helming such an on-the-pulse screenplay, even as he was desperate to dump his shackles as a horror maestro, is critical to his legacy. You can see Craven had something to prove. It has the vitality of a young-man filmmaker and the insistence on going hard with the violence is a Craven trademark. Maybe a filmmaker with less cred wouldn’t have been able to expose so many innards in a mainstream slasher flick, but thank god Craven managed it. It gives the film the edge it deserves and the required threat so essential to offsetting the satire.

That entire last 45 minutes – the party bloodbath, the endless chase, the unmasking of the killers and Sidney’s defeat of them – is just aces. The film is so entertaining and fast on a scene-by-scene basis that it would have been easy for them to fudge the ending. The “whodunnit” trope is inherent to the genre and many predecessors – gialli especially – are so often let down by their reveal of the killer and their dumb motivations or questionable logic. Scream, on the other hand, totally slam-dunks this aspect.

The two-killer reveal is genius and makes the double-bluff reveal of Billy as a killer even more powerful. By slowing everything down and dedicating a great slab to the unmasked maniacs discussing their plan and showing their true colours, the film’s lunacy soars to new heights. Williamson goes right into the minutia of their plot to the point where we get to see them stab each other and break down into madness while Sidney looks on – a new horror heroine crystallising into existence. Somehow, without the mask, without the slasher format, Williamson keeps Screamticking on for whole other act and it’s brilliant. It practically becomes a new film at this point, but it works amazingly well. As soon as you have Matthew Lillard fumbling with the blood-covered phone, lamenting “my Mum and Dad are gonna be so mad at me”, it becomes both hilarious and absolutely disturbing. Unlike Michael Myers, these psychopaths have faces and voices. They’re just human fucking teenagers! It’s the logical conclusion to all this craziness, all this Gen-X deconstruction. That scene is everything for me. The performances from Ulrich, Lillard, Campbell and intervening Cox and Kennedy are all so good. For me, it’s the reason Scream is a true masterpiece. It’s the reason I’ll be watching this damn movie for another 20 years.