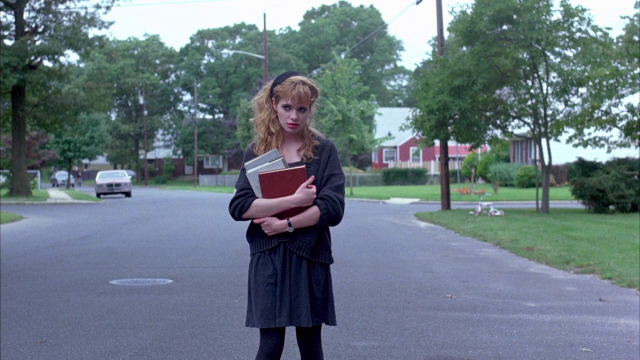 My first Hal Hartley movie! A pretty glorious dip into a purposefully off-key world punctuated with a thrilling, mischievous wit. It’s a film that throws down a gauntlet of intent. Like many great stylists, Hartley seems to arrive fully formed. Yes, I don’t have any of his other films to compare it to where I’m sure his voice becomes more assured, but watching The Unbelievable Truth is to immediately grasp a voice and sensibility. With one 90 minute swoop, I now understand completely what people mean when they say the words “Hal Hartley-esque”. You know when you hear Mamet dialogue for the first time, or Aaron Sorkin, or Tarantino or Spike Lee and the same applies here. The language just sizzles and pops to its own tempo. Very intelligent and very funny.

The film is also full of faces I now vaguely recognise from later work but never have I seen them so front and centre. People like Robert Burke and Edie Falco (okay, yes, I’ve seen her front and centre plenty) were mostly unknowns when this film came out and they feel born from this universe. The real stand-out, ofcourse is Adrienne Shelly. She has a face made for cinema and a tongue capable of verbal somersaults and wicked poetry to match. Watching her in every scene reminded me of the first time I saw Anna Karina in a Godard movie or Marilyn Monroe in Hollywood black and white. She is a stunning and individual actress whom I immediately fell in love with. Finding out Shelly died a few years ago made the experience more tragic but I now look forward to seeing her other films with more care and savour.

Well, as far as one film goes, I can safely say I’m a fan of Hal Hartley. His style is wonderfully assured with just the right amount of experimental. At one point Burke and Falco share a scene in a cafe and they repeat their lines of dialogue multiple times through, faster and faster as if Hartley ran three takes in quick succession without calling “cut” and merely dubbed out his cries of “again!” in post. As a script the film occasionally feels too clever for its own good, it is so neatly and perfectly plotted and laid out that the smugness of its construction can’t be helped but it too feels intentional and right. I quite loved this. I can’t wait to dive into this universe again and again.