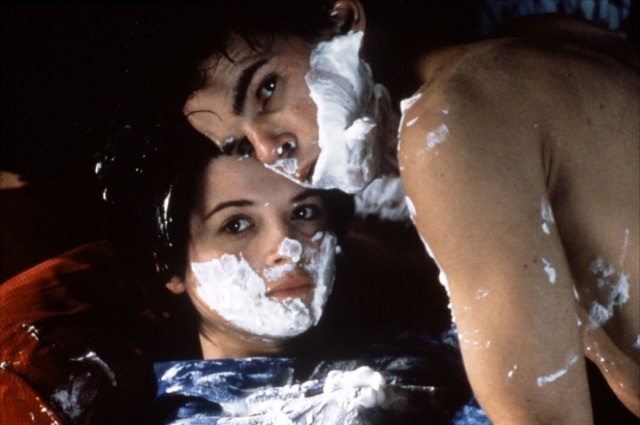 My second Leos Carax film following Holy Motors back in 2012. It’s been a long time coming. A titan in the rarely-discussed “cinema du look” movement from France, Mauvais Sang is a spectacular film to behold. Stylistically individual with a genre sensilbiity which combines tropes from both crime and romantic cinema, it’s quite the cocktail.

Like the films of fellow countryman Jean Pierre Jeunet, Mauvais Sang exists in its own bizzaro universe. The crux of the story involves a heist to steal a serum that can cure a deadly sexual disease. It’s set in the future but isn’t showy about it in the slightest. The technology and architecture doesnt feel futuristic, but it does feel distinct. In fact, I feel that Carax only really set it years ahead so he could play world-builder without scrutiny. The film’s backdrop is beautifully designed and imagined.

I kept having to remind myself this movie came out in 1986 because of how modern and fresh it feels (hey, maybe it did look futuristic in ’86!) It doesn’t look too dissimilar from something that could have been made ten or even five years ago. The presence of future belles of french cinema, Juliette Binoche and Julie Delpy, is quite lovely. They both look so young and fresh faced, each wielding a feminine style and badass swagger that is somewhat iconic. The real star, of course, is Denis Lavant. Working for the second time with Carax, he turns in a magnificently physical performance. Part-circus clown, part silent movie star, he is never anything less than captivating and unpredictable. The guy flips a car over with his hands for crying out loud. Just having Lavant at the centre of this film, with his unique approach to performing, makes it a true revelation. The race through the streets to Bowie’s “Modern Love” is one of those movie moments that just cements itself into your very being the minute you watch it. It’s no surprise the sequence has been endlessly quoted in subsequent films from Baumbach’s Frances Ha to Joel Potrykus’ Buzzard. The original, however, is still the best.

I was rather enchanted by this film. The story of romance in a harsh modern world is expertly rendered and is peppered with countless inventive gestures of love and kindness (Lavant carrying Binoche over his shoulders to save her the pain of burning her feet on hot cement is a heart warmer, as is their shared shaving session) as well as moments of blunt, film noir darkness. It feels representative of that special allure only cinema can accomplish and Carax is clearly a man besotted by film and film history. It is very, very French in that regard but also very, very good. Almost everything about Mauvais Sang manages to be a mini-revelation. Très bien!