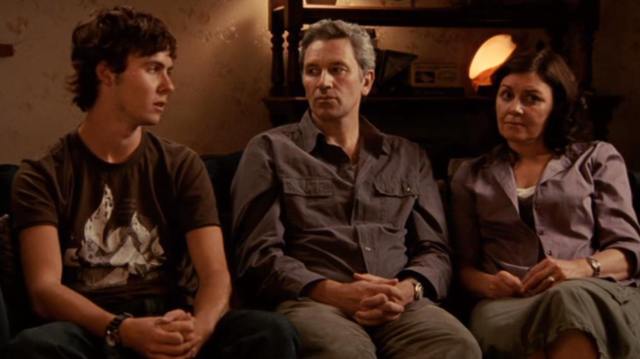 Lake Mungo is one of the most effective faux documentary horror films I’ve seen in a long time. I’m hesitant to call it found-footage because it isn’t really presented as that, but cellphone clips and home video footage do play a big part in the unravelling mystery.

A young girl called Alice dies under mysterious circumstances and despite her body being identified in the morgue, her presence continues to haunt her family and those within their immediate radius. What first appears to be another supernatural-tinged exercise in “what-the-fuck-is-going-on?” storytelling slowly unfurls into something far more complex and surprising. The film wears its Australian heritage proudly and the spooky goings-on of homeland classics like Picnic at Hanging Rock or even something as recent as Wolf Creek continue to be passed down into this film. At times it feels like a fresh take on the Laura Palmer complex: in the wake of her death, a young woman of apparent purity is slowly revealed to be anything but. Yet, much like its fellow sister film The Babadook, at its core Lake Mungo is a film about grief and how grief in itself can trigger some strange behaviour. As a dissection of grief it is one of the most authentic and original I’ve come across. Sometimes human behaviour can be more puzzling and unnerving than inhuman behaviour.

The real ingenuity of the film is how writer/director Joel Anderson continuously pulls the rug out from under you. He cleverly subverts spooky expectations with grounded explanations and somehow manages to make the film even more unsettling as a result. There’s many points in Lake Mungo where you can’t help but keep watching because you genuinely have no fucking clue where it’s going to go next. Even the dead-ends and loose-threads add to the film’s appeal. It’s one of those movies I can easily picture myself going back to time and time again and getting something new from it every time. It demands replay.

Technically the film is very well done. It’s extremely convincing and even though I knew the whole film was a construct, I still found myself squinting into the dark corners of the frame and scrutinising the presented evidence as if it were real. That’s when you know a film is working. It’s not perfect, some of the digital effects a little cagey but never to point of ruining the illusion. Lake Mungo is a gripping, chilling little movie that deserves a bigger fanbase and exposure. Make no mistake about it, this is a film that will remind you to fear the dark.

This entry was posted in Movies Watched In 2016, Reviews and tagged Joel Anderson, Lake Mungo. Bookmark the permalink.