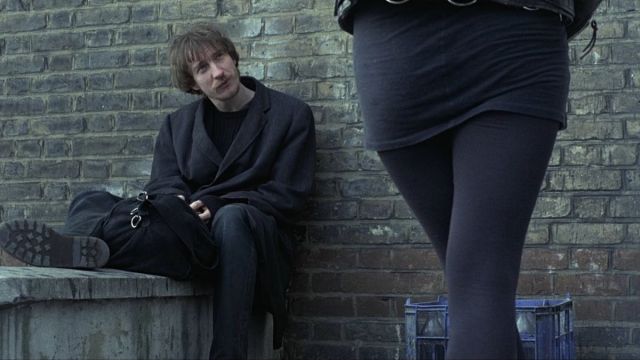 Naked was the first Mike Leigh movie I ever saw and it hit me like a ton of bricks. I’d never seen something so kitchen-sink be so stylised, heightened and doom-laden.

David Thewlis’ performance is one of the greatest ever committed to film. Has there ever been a character like Johnny before or since? I think not. He is at once charming and despicable, disgusting and fascinating. The dialogue linguistics alone are almost hypnotic. Not only is it impossible to take your eyes off of him, but you’ll have his voice rattling around in your brain for days on end. It’s one of those performances that just sinks into your bones and carves its name there for all time. The prospect of revisiting the film again was both exciting and daunting. Did I really want to spend another 2 hours in this world with this character? The answer is always a hesitant “yes”.

I think this will always be one of the most important films to me. There is before Nakedand after Naked. I first saw it when I was about sixteen. As someone who is mainly passionate about genre cinema and American filmmakers, British film was never something I could get enthusiastic about unless it was directed by someone like Danny Boyle. I went to the movies to escape the council estates, the Northern accents and the squalor of working class Britain. Reality and naturalism really wasn’t my bag, and even to this day, still isn’t unless it comes with a certain dose of style. Upon seeing Nakedhowever, I saw a version of Britain that was just as affecting, visceral and bracing as anything in any horror film. Johnny’s journey is a nocturnal odyssey. His ramblings and conversations are like fucked up beat poetry. The London in Naked is a mythological London, but it’s all the more terrifying because it was shot in the real thing.

This is a truly apocalyptic film. Leigh himself has described it as being about “the end of times”. It has a relentless edge. The film feels violent and angry. Almost punk-rock in its savagery. When it does bare its teeth and explode into violent sex or, indeed, actual sexual violence, the results are unflinching and shocking. Everything is so desaturated and lifeless. It is a walking corpse of a film, yet the bleak atmosphere is so all-encompassing that it becomes somewhat beautiful, like a Giger drawing.

All of the characters have bizarre backdrops too. There’s Brian the security guard who is literally guarding empty space, the woman in the window seemingly unaware of the map of Ireland pinned to her wall and the Cafe girl who lives in a house owned by two gay men she has apparently never met. It’s as these people have just found themselves in a foreign land and are just carrying on with their existence without any sense of purpose or direction. It’s crazy that a film with a protagonist as bizarre as Johnny manages to have him meet human beings who are even more perplexing than he is. And in the case of Sebastian/Jeremy – a walking caricature of the 80s yuppie gone feral – a man who is even more unpleasant. The core of the film, thank god, lies with Lesley Sharp’s Louise. She is the only character who seems to live in reality and Sharp’s performance goes a long way to stop the film from being unbearable in its dourness. Her relationship with Sophie (Katrin Cartlidge, RIP) is what gives the film hope and optimism. Many lazy critics were quick to label Naked as misogynistic but all anyone with half a brain has to do is look at those two characters and realise that the opposite is actually the case.

Naked is a film that is nearly impossible to enjoy, but it is an experience quite unlike any other. Mike Leigh went on to ascend the ranks of greatest British filmmakers who have ever lived but he never made a film this bleak and uncompromising again. I’m not saying he never made anything as good, I have a soft spot for many of his films, but he pretty much made the definitive statement in feel-bad British cinema and, rightly, felt no need to return to this territory. It captured the mind-set of Britain during this time and place; post-Thatcher, pre-Millennium. All the anxieties and insecurities of the country are here made flesh, with Johnny as their unconventional mouth piece. This is one of my favourite films of all time and one I will never be able to shake. If you want to feel simultaneously shit and thrilled for 130 minutes, this is the film for you.