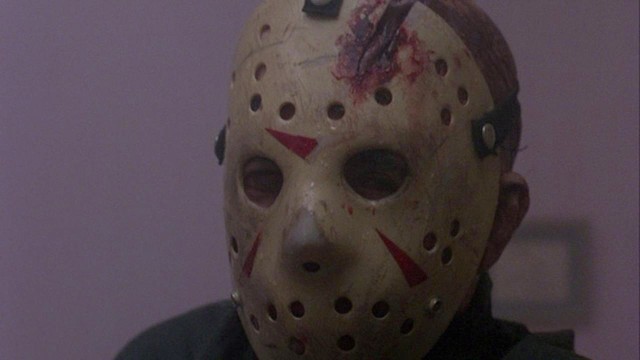 Out of the four Friday the 13th movies I’ve revisited recently, The Final Chapter might be the one that has fared best. Based on my recollections, I assumed Part 2 was the best of the first batch but, actually no, this is the strongest entry so far.

Directed by Joseph Zito, The Final Chapter has incredibly strong atmosphere and visual style. Shot almost entirely at night during a hellish downpour, the budget feels like it was extended beyond the special effects and the bland, interchangeable backdrops of the previous instalments are bettered here with environments that feel lived in and authentic. The movie also kicks off with a long steadicam shot showcasing the aftermath of the carnage from Part 3. It’s even cooler as most of the scene appears to be lit from a spotlight from a police helicopter hovering above the whole scene. Yep, for this one they even got a goddamn helicopter!

The film on the whole feels more serious and edgier. Jason is at angriest and most ruthless here with the violence being very extreme and harsh. It’s no doubt enhanced by Tom Savini returning to the franchise to – he assumed – kill off his Jason creation once and for all. We all know that ultimately it wasn’t the final chapter, but it was the end of Jason in human form before he became an undead monster. And for Savini to be at the helm of his demise brings a nice sense of closure to these first four movies.

The cast of teens here are the best of the initial four with an eclectic ensemble that includes the kid from The Last American Virgin, twins and Crispin Glover! The casting is excellent. Sarah and Doug are the only couple I’ve seen so far in the series that actually convinced me they were genuinely in love. Teddy is excellent. Glover’s dancing is iconic. What a set of kids. I also really dig the new dynamic thats created by adding a family with a kid into the mix. Corey Feldman will always be Tommy Jarvis to me. Finally Jason Vorhees was given an ultimate foe and how fitting that it would be in the form of a thirteen year old boy who defeats him by taking on his own appearance. Jarvis and his knack for special effects is a clear nod to Savini and I just really love that, for this film, the filmmakers found room to give one of its heroes a genuine talent and interest. It goes a long way. In the end, the make-up artist saves the day! Very appropriate for a franchise that only became a success because of it’s extreme kill effects.

This is also the first of the sequels that actually has something of a plot which arises as a consequence of the previous movies. Rob turns out to be the brother of Sandra from Part 2 looking to avenge his sister’s death. His vendetta doesn’t ultimately go anywhere but at least the writers tried to build on the mythology a little bit rather than just reverting to the “stalk, kill, repeat” formula. Jason is overcome in much the same way Ginny outsmarted him in Part 2 as well, by one of his victims dressing up in a guise familiar to him. It follows the rules already in place. The continuity in Jason’s appearance is also the most consistent of the sequels. As a result, The Final Chapter does feel like an actual chapter rather than just another familiar retread.

Had a lot of fun revisiting this. There’s load of really cool moments. Jason getting a machete to the face and sliding down the blade is an absolute Savini slam-dunk. Trish falling backwards out of a second storey window in slow motion during torrential rain is just flat-out bad-ass. There’s nothing in the previous three movies that comes close to that in terms of pure visual awesomeness. This might be living, breathing Jason’s last stand but at least he went out on a high.

This entry was posted in Movies Watched In 2016, Reviews, Rewatch and tagged Corey Feldman, Friday the 13th: The Final Chapter, Joseph Zito. Bookmark the permalink.