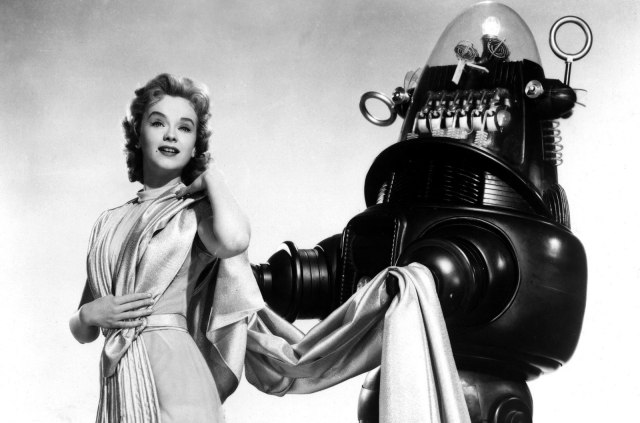 Forbidden Planet is such a seminal piece of science fiction history that just the mention of it’s title brings to mind imagery from the film, even if you’ve never heard of Anne Francis beyond her namecheck on the opening song of The Rocky Horror Picture Show. Robby the Robot is an icon alright? Pretty much every major piece of swashbuckling sci-fi made since it’s release owes some kind of debt to Forbidden Planet. Luckily the film itself holds up.

The entire design of the movie is fantastic. It showcases a future of pristine sets, uncreased uniforms and almost total surface perfection. Light just seems to bounce off of this movie. It captures the same forward-thinking optimism that would become the bedrock of Star Trek and is anchored by an excellent, brass-tacks B-movie plot. Everything we recognise as 50s sci-fi could have originated with this movie for all I know. It’s iconography and imagery is so classic. Who knew Leslie Nielsen was once a “serious” leading man? I barely recognised him here but he works as a chiseled hero. Walter Pidgeon’s performance as Dr. Morbius is lots of fun too, complete with villainous goatee. Anne Francis gets the short straw, basically acting as the damsel in distress or a horny minx throwing herself at he male co-stars. The film could also work under the title Alatair IV Girls Are Easyas a result but she too feels somewhat iconic. The movie mines her character for ideas though, which makes up for the simplistic characterisation. Then again, this is a 50s sci-fi movie!

The thing I really like about Forbidden Planet is that the science really does drive the fiction. There’s some terrific heady concepts at work; invisible monsters, alien races, a mind-altering machine and good old-fashioned grand metaphors for man’s folly for good measure. It’s a delight to sit through and even today, sixty years years later, the aesthetic pleasures are even more enjoyable given how far the genre has come since then. It feels stylised rather than dated. More than anything, it’s just a damn entertaining yarn with ray-guns, robots and a scene-stealer called Robby. Very cool.