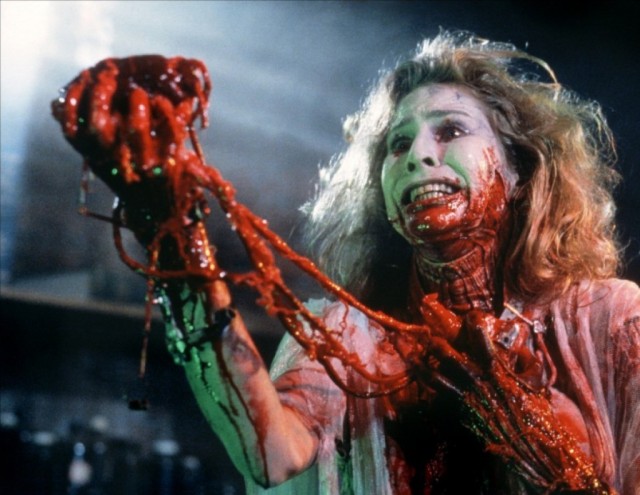 Brian Yuzna’s follow up to Stuart Gordon’s beloved Re-Animator(which Yuzna also produced) is pretty satisfying as far as 80s horror sequels go. As is generally the case, the credo seems to be “more is better”, I feel like the body count in this one is more outlandish yet not quite as shocking. Humour was a big part of the first Re-Animator though so you can’t accuse Yuzna of injecting unwanted slyness. It’s one of the few horror franchises that combined both sensibilities – horror and humour – from the outset.

I feel like brides built from body parts were a big thing in the late 80s/early 90s. It’s difficult to watch this and not think of Frank Henenlotter’s similarly deranged Frankenhooker or visa versa depending on which one you saw first. I like both films a lot though, but Bride of Re-Animator pales in comparison to it’s own prequel mainly due to a lack of spark which made the first Re-Animator such a gonzo vision. A lot of loose plot threads from the first movie are picked up – I always appreciate continuity between sequels – and it’s a pleasure to see the returning cast members again. Only in this universe can a severed head return as a viable villain. All that being said, Barbara Crampton’s presence is sorely missed and while Alotta Fagina from Austin Powers offers up some pleasing eye-candy in her place, she’s nowhere near as memorable.

A lot of the enjoyment of Bride of Re-Animator comes from Jeffrey Combs absolutely killing it (literally) in his encore performance as Dr. Herbert West. Combs just is this part. He treats it like Shakespeare and takes the part more seriously than most actors would dare in this genre. His commitment goes a long way and I firmly believe that West, as a truly unique horror creation, is the reason this franchise has such long shelf life. He’s fucking great and Combs too earns lifelong respect from me for his work on these movies, as well as the others he made with Gordon and Yuzna.

There’s not much to say about this movie. It is what it is and if you get as far as holding the DVD case in your hands you’re bound to know what to expect. It’s exactly what you think it is and exactly what you want it to be. Entertaining, easy and occasionally barmy that delivers up plenty of excessive spectacle in the special FX department. If you love Re-Animator you’ll like Bride of at the very least.

This entry was posted in Arrow Films, Movies Watched In 2016, Reviews and tagged Brian Yuzna, Bride of Re-Animator, Jeffrey Combs. Bookmark the permalink.