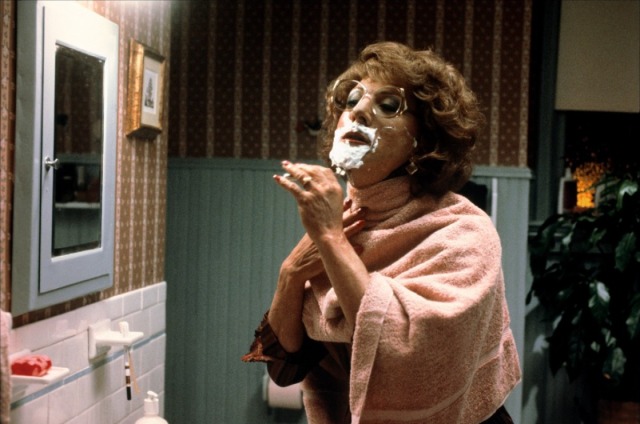 Last year, Tootsie was voted the greatest film of all time by a handful of actors and I thought it was a refreshing choice for the top spot. There’s clearly something about this movie that resonates with actors, that speaks to them and showcases a world of situations they are familiar with.

As the film starts the choice made a lot of sense. It’s about Michael Dorsey (Dustin Hoffman) an actor who loves the craft but his years of work in the business have battered his patience. Now he trains fellow actors, desperately trying to beat into them the same love and understanding of the art that he has. He can’t get work for himself because he’s a pain in the ass, which his agent (Sydney Pollack) is so fond of reminding him about. In the meantime he attends parties, works a side-job waiting tables and talks shit with his best friend and room-mate (Bill Murray). The frustration of being a young actor is the heartbeat of the film’s earliest scenes and they are all acutely observed. The staying up late learning lines, the panic before an audition, the feitishization of make-up, the envy and endless conversation about theory and craft as well as the unknowing of where the next pay check is coming from; it’s all accounted for. Finally Michael disguises himself as a woman, Dorothy Michaels, and auditions for a part on a popular soap opera in order to prove he can do any part just as good as anyone, gender be damned. Of-course, he gets the part and that’s where the film really starts.

As with many of Sydney Pollack’s movies, Tootsie is directed and staged very simply. He favours performance over style and as funny as the film can be, it is handled like a drama. Dustin Hoffman clearly had a lot invested in this role (just check out the numerous times he tears up while telling stories on Criterion’s release) and he is spectacular in it. As an unconventional star himself, he manages to put all his sensitivity, strength and neurotic edges in both Michael Dorsey and Dorothy Michaels. It is one of his great roles and he is totally convincing in drag as the battle-ax Dorothy. The potentially button-pushing gimmick of having him in drag is never played for edginess or provocation. I forget that Some Like it Hot did this over twenty years earlier (and Mrs. Doubtfire would do a broader variation a decade later) because the way it’s handled really feels revolutionary.

Jessica Lange is just a diamond as the soap actress Michael falls in love with. There’s a certain tragedy to her character – she constantly feels alone, is preyed upon by sleazy men and mostly misjudged by women – and resorts to alcohol to numb her isolation. Pollack doesn’t judge her or make her seem like a train wreck, she’s never anything less than genuine and heartfelt, quite the tightrope walk by Lange and it’s a role that rightly earned her an Academy Award.

Bill Murray and Terri Garr also show up in supporting roles and, as both of them are mainly known for their comedy work, it’s great to see them do something more grounded. I’ve never seen Murray be this casual in an 80s movie and he works well as the obligatory “best pal” role. He has some of the film’s best lines but doesn’t seem interested in stealing the light away from everyone else, which is rare for Murray. It’s proof he’s just as good in small doses as he is in leading roles (remember he was in Ed Wood?) Pollack uses him here in much the same way Wes Anderson would twenty years later. Garr, who I adore from her work in After Hours is characteristically wild and wired and whenever she enters the picture the saturation and energy seems to increase. She’s a great foil for Hoffman and a nice contrast to Jessica Lange. Oh and future-star spotters will appreciate a young Geena Davis cropping up a few times too, in her underwear no less.

I wonder what a film like Tootsie would look like if it was made today. It would probably be The Danish Girl. Pollack’s film is so light on it’s feel and grounded in character, a love of the subject and focus on it’s core story that it totally avoids being a hamfisted message picture. Really, it’s about different people coming together under absurd circumstances. It’s absolutely Hollywood, the film ends with a sense that everyone and everything will be okay, but it has that New York street-level authenticity that this generation of actors ushered in which makes it much sharper and memorable than it would have been a decade earlier. The performances are a delight, the characters are a joy and the script is excellent. Pollack’s direction might be the least memorable thing in it, but his steady hand over the tone and characterisation is essential. Maybe Tootsie doesn’t mean as much to this generation as it does to those that came before. But I love that it means so much to so many people and has now officially become “the actor’s movie”.