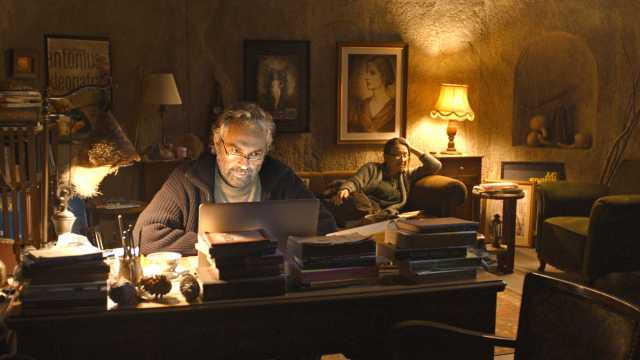 An ambitious and novelistic investigation of the human psyche, Nuri Bilge Ceylan’s Palme d’Or winning epic Winter Sleep is a film I’ve thought about every day since seeing it six days ago. At a whopping 196 minutes this is easily one of the longest single-sitting movies I’ve watched in my lifetime yet the bloated length never feels like an indulgence. There is something hypnotic about this movie. You sink into it and settle in. For such a long film, its scene count is minor and its atmosphere is intimate yet thematically the film is rich and vast.

The Anatolia landscape on show is incredible. The film is anchored by a hotel chiseled out of a cliff face yet Ceylan deprives us from the outdoors for much of the film’s run-time, instead holing us up indoors over desks or kitchen tables for the film’s extensive dialogue scenes. These sequences are the film’s set pieces, running for as long as twenty minutes a piece. But again the length is never felt, in fact you grow to cherish the extended conversations. In the same way I am addicted to hearing Linklater’s characters wax lyrical about life, love, dreams and despair there is a majesty and intelligence to Ceylan’s writing that is almost as rewarding and complex as life itself.

Ceylan has matured into a filmmaker of incredible control and skill, there is a technical mastery to Winter Sleep that is really something. The film feels elemental, a towering masterwork that casts a powerful shadow over lesser films that lack Ceylan’s ambition and craft. Deeply rooted in literature and monumental concerns, Winter Sleep is one of the decade’s best films and an unforgettable achievement in filmmaking. I don’t often see films this impressive and complete that aren’t afraid of the length required to be comprehensive. One of those movies that makes you think “movies can do this?” I adored it.

This entry was posted in Movies Watched In 2016, Reviews and tagged Nuri Bilge Ceylan, Winter Sleep. Bookmark the permalink.