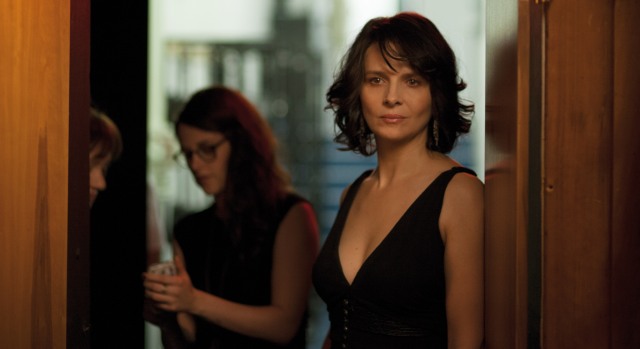 My first Assayas! Clouds of Sils Maria is a curious little movie. The mix of international stars with an unmistakable art-film sensibility is fun and actually lends the film more texture as opposed to weakening it. The film plays like a polite version of Maps to the Stars in it’s take-down of celebrity culture and Hollywood politics. It’s pretty savage when it wants to be yet never goes far enough to be considered rude or controversial.

The movie plays a lot with reality and dreamspace with many subplots left open-ended and strange flourishes peppered throughout. I haven’t seen enough of his work to know whether or not this is in keeping with Assayas’ previous films but it certainly feels like it. It’s got a lot of beautiful shots to gawp at and playful musical cues but the pace can be a big sluggish at times.

Pairing Binoche up with Kristen Stewart is a mini-masterstroke and the two are a fantastic double-act. I’m assuming the majority of the world are still dumb-as-fuck and see Stewart as “that chick from Twilight” but hopefully this (and her upcoming projects) will finally free her of any baggage. Chloe Grace Moretz too is clearly loving this opportunity and chews up the scenery whenever she gets the chance. It’s a tad grating at times but as the character is supposed to be that way I have a hard time blaming her performance completely even though it never feels like anything more than a fun bit of stunt casting. This is undoubtedly Binoche’s show though and the part really lets her dig into her own past as an actress and her image as international cinema icon before scratching it away to reveal the human being beneath.

The film didn’t really leave a huge impact on me (I’m more of a Cronenberg guy) but I’m sure it won’t be the last Assayas movie I experience. Can definitely see why many of my fellow cinephiles flocked to this with such enthusiasm.