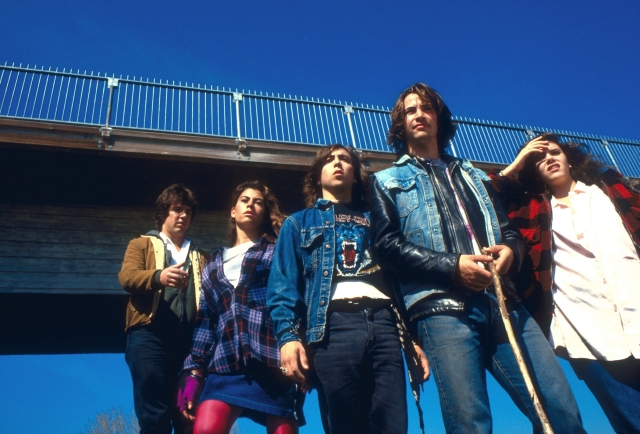 In what is surely one of the most overlooked and under-appreciated American movies of the 80s, a psychopathic teen murders his girlfriend and casually tells all his friends about it causing the group to slowly splinter and self-destruct. River’s Edge begins minutes after the murder has occurred as Samson (Daniel Roebuck) sits on a river bank next to his girlfriend’s naked, lifeless corpse and screams victoriously into the morning air. It’s an image straight out a dream and an immediately arresting one. For a film filled with a cast and imagery from 80s teen movies you have to ask yourself “where is this going?” Talk about unfamiliar territory.

River’s Edge is kind of like Stand by Me for not-pussys. That’s not to knock Stand by Me but as far as movies about teens and dead bodies go, this one is easily the darker and more complex of the two. There’s something extremely fatalistic about River’s Edge. Obsessed with death and de-saturated suburbia, it has a post-apocalyptic tinge that chronicles a generation of teen druggies and deadbeats as they stumble around their shithole of a town scoring free drugs off of a nutty Dennis Hopper or moping around look all downbeat. It’s just so bleak, man. In the process though it captures something about being a teenager that all those poppy John Hughes and hip studio movies never could – the feeling that life flat out fucking sucks. If Tyler Durden ever time travelled to the 80s and defaced a popular teen movie as he does with airline safety sheets it would probably look a lot like River’s Edge.

All of the actors are excellent, either fresh faces at their freshest or future-character actors at their most raw. Crispin Glover is the real stand-out as the haywire Layne. His performance is in total contrast to everyone else on screen, heightened to the point of cartoon and frenzied way beyond realism but somehow, within this universe, it makes sense and is actually quite a remarkable piece of work. I mean, this guy even makes Dennis Hopper look subtle. And this is in the same movie where Dennis Hopper plays an amputee ‘nam vet who spends most of his time dancing around with a sex doll! Just crazy.

I really loved this film and I’m astounded it got made. It’s one of those weird, fucked up things you come across that makes you feel thankful it exists. You watch something like River’s Edge and you just want to tell all your friends about it. This thing should be a flat out classic. An amazing slice of darkened 80s Americana that can happily sit on the same shelf films like Blue Velvet occupy. A goddamn gem of a movie. See it. Tell your friends. Just don’t kill your girlfriend in between.