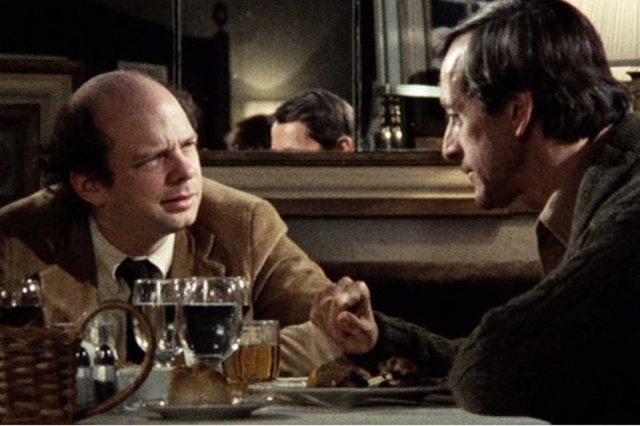 The original talking heads movie, My Dinner with Andre is impressive and revolutionary because of it’s commitment to simplicity. This is literally just a filmed conversation, albeit a very intellectual one, between two actors, Wallace Shawn and Andre Gregory, in a restaurant. The film is very tightly scripted and wonderfully performed by the two actors but even though they use their own names the characters on screen are not representative of their actual personas. This isn’t a documentary, it isn’t an interview piece, it’s a film and a very unconventional one. So unconventional in fact, that it’s banal presentation becomes quite thrilling.

When you know the concept of My Dinner with Andre and look at the running time, you wonder if the conceit can remain interesting for close to two hours. It does. The movie is like taking a big dive into a sea of words, storytelling and language. Even though you’d be hard pressed to remember every detail of the conversation once you’ve finished the film, aren’t most conversations like that? There’s something hypnotic about both these actors reeling off endless natter, I’m sure it helps that their individual voices are also pleasing and distinct. I’m a big fan of talk in movies anyway so whenever a film promotes dialogue above visuals and makes it work I’m very rarely disappointed. You really get to know these two characters and feel friendly with them by the end and sort of want to eavesdrop on their next get together, whenever that may be.

Director Louis Malle resists any temptation to spice up the film visually and relies on the same four or five set-ups for the duration of the whole conversation which in itself is a bold thing to attempt. This is the first Malle movie I’ve seen so I don’t know what his default visual setting is (though I recognise that this film is in no way representative of his key output either) but he seems happy just to sit in and present the scenario as realistically as possible. It got me thinking about Steve Jobs a film I absolutely love but can appreciate how Boyle’s zippy, cut-away heavy approach might grate on audience members who would prefer just to sit, watch and listen without having their attention forced all over the place. Sometimes the words and performances are strong enough and My Dinner with Andre is a great showcase of that.

This entry was posted in Movies Watched In 2015, Reviews and tagged Andre Gregory, Louis Malle, My Dinner with Andre, Wallace Shawn. Bookmark the permalink.